Just back from a visit to Aarhus, Denmark. Went to check out this module at this uni to see the fit with the BA Filmmaking at NTU.
See most recent showreels for the work produced from this module here and here.

Never been to Scandinavia before and really enjoyed. Shown around by an old friend and really liked the vibe of Denmark’s second largest city.

The dock area where the film city (film byen) is located was buzzy with lots of media companies and studio spaces as part of this development.

Went to a bar where tennis super pro caroline wozniacki frequents/frequented and as I say, really enjoyed it and feel it will be a good fit for the students.

More pics can be found here

So NTU are starting a BA Hons Filmmaking course that I’ll be teaching on and talking about periodically about here. Applications are proving very strong. Starts in October of this year.

The focus is writing, producing and directing

Super excited to be teaching filmmaking for most of my week once it kicks in.

I’ve taken it to mind recently that Danny Boyle is the Theatre Director who has made the best transition to Film Director over the last fifty years of British theatre/cinema history. There are lots of Directors who have worked in both Theatre and Film and continue to work in both but Boyle is now predominantly a film director unlike Mendes, Olivier for example. I don’t think Frankenstein heralds a return to the Theatre. I believe he has made the best transition because he understands that cinema is about energy and movement and that the camera is the primary storyteller.  Look at his films. I make this statement not from an exhaustive analysis of his film work but from instinct. Lots of Directors who make this transition think that moving the camera about is film and whilst Boyle often throws his camera all over the shop he uses that movement to storytell. I was thinking of international directors who might compare and I came up with Kurosawa and Welles.

The Science of Watching films

Interesting podcats/video post here on the Guardian newspaper website today about the science of how people watch films. Eye-tracking equipment and a scene from There Will Be Blood. Check it out before I drink your milshake.

You’ll need to watch the video as well. You’ll find the the link to the video on the same page as the podcast.

Interesting article in today’s Guardian newspaper on Monsters film due for its uk release next friday. Posits the argument that it may be a game changer. Doubt it as Director Edwards has a particular and specific skillset that can’t be industrialised.
Go see the film if you get the chance. 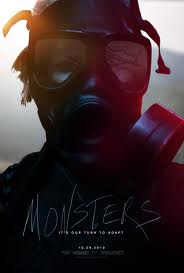 Film is followed by a q&A session with Director Gareth Edwards.

Edwards is also delivering a Masterclass in the evening. Not sure what the crack is here but I imagine he’ll deconstruct a number of scenes from the film.

UK government announced today that the Film Council will be shut down. Like all of these things there seemed to be as many denigrators as appreciators but my feeling is that a valuable resource will soon be lost. The headline stuff may well be prone to the favouritism and elitist inside-ism that these quasi-government-handsoff-independent quangos inevitably suffer from but the lower profile work, my sense is, provided a valuable film-making avenue and kept low level valuable momentum and energy in the industry. Some really strong uk filmmakers have been supported by the film council. Haven’t seen the official announcement yet so not sure when the desks are going to be cleared or what might rise up in its stead. The first of many, many painful cuts to come.