Just come across this site that I hadn’t been aware of before The Hollywood Reporter. What grabbed my interest was the roundtables. Actors male and female, Directors. There is a Writers’ Roundtable but split into lots of little clips not the hour long versions that the otehrs are. They were all around late January and presumably before the formal nominations were out as not all whom feature were Oscar nominated.

Escape Studios is heading up to NTU to deliver one a talk to the Multimedia students.

This is from their blog:

“Having already worked with a number of the Universities offering courses in Animation, Games and Visual Effects we are now looking to broaden the scope of these relationships and meet with students and faculty from a wide range of creative and technical backgrounds.
Drawing on our experience of training and recruiting for the CG industries we will be introducing students to the worlds of Visual Effects, Games, Animation and Visualisation. Not only are we talking to university students who will soon be considering their job prospects but colleges, where students are just starting to think about their career options.”

We have had a couple of graduates go through the Escape course. The course is very expensive but has the reputation as being extremely good at gaining employment for the student. Conrad Olson now works at Framestore and Vincent Chang now works at Double Negative

Check out BBC Writer’s Room. Some interesting blog posts. One by a script reader which outlines the ‘ten page read’ rule. Not many places that will guarantee your script a read and some feedback if they rate it in any way. I was going to say for free but your license fee might be seen by some as a partial payment. However you conceive it check out similar script consultancy fees and compare. While that consultancy fee will no doubt guarantee some kind of response and maybe quicker than Writer’s Room what level of access will it get you? Consider the bbc’s output and the benefits that might accrue from being in some way inside that system.

57 Images Of My Father draft

Read completed draft of 57 Images Of My Father last night. Pleasantly surprised that it made sense. The day before completing it I had what seemed like a radical new idea for the ending. I say radical, new idea I actually mean, had an idea for ending seeing that I didn’t really have one prior to that.
Reading it back I wondered if that idea was actually present the whole time as it seemed well integrated into the rest of the script.
I don’t consistently write treatments, although I mostly kind of outline, I don’t do scene cards but collect ideas for scenes as and when they occur and the incorporate them into the script in the appropriate order as I write. I then periodically refer to this Notes list as rock along.
If you haven’t checked out creative screenwriting link in the links section of this site then do so for interviews with writers (screenwriters only) to hear their process.

The Raindance people are making available the Oscar-nominated scripts free to download. They are using the ‘pay by tweet or facebook post’ app that I hadn’t seen before. You retweet/status update the url and are then able to download the scripts. Check it out here

This time of year always reminds me of the films that I missed/not yet seen.

57 Images Of My Father

I’ve been a bit stuck recently but was trusting my process and am now back cooking on gas. It was reading some feedback I received about 18 months ago that did it:

” There’s no really full present tense action propelling each scene forward, and it’s a play that is perhaps slightly too much about perspective rather than objectives”

The feedback was form the Royal Court Literary Manager. That may not make too much sense to you having no bloody clue what the play is about but it proved to be enough to get over the slight “Shit, how do I solve that problem?” problem I was having.

Reading Robber Barons by Matthew Josephson at the moment. 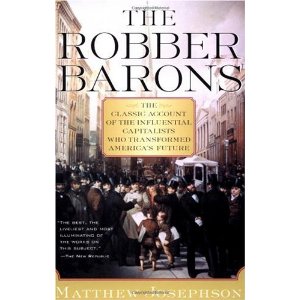 Read this little extract and marvel that the book was written in 1962 about the 1890’s America and not last week about the Western monetary system:

“The money-men who were supposed to play a leading part in our business society had proved themselves incapable of leadership in the time of crises. They were shown in many cases to have acted without good faith or honor towards their associates, their clients and their stockholders.”

Absolutely terrible that the public library as an institution is so threatened by the uk Goverment’s spending cuts. I really remember the moment when I could go from being limited to kid’s allocation four books to being allowed adult allocation of six books. I don’t know what age that happened at, I’ve no memory of that but the actual moment in the library as the librarian wrote out the two extra tickets is so strong. It meant two more books, not having to wrestle so much about which four to take. In reality like a football manager who is always after the extra three players to complete the team or indeed the Writer who is only two more drafts away from the perfect script, I always seemed to find I needed to take out two more books than my allocation. Reading has always been a major activity in my life, at aged 9 I had read most of the books in my school library and had to resort to reading GIRL’S book, eurghh!! I still want to complete the pirate book series I never managed to finish due to the school not having all the books in the series.
The Book is an absolute key cultural object. The free public libary is a way of getting that object into everybody’s hands, irrespective of class or wealth. I am a Writer because I am a Reader. Absolutely no doubt about that. I spent (and still spend) a lot of time at the library and would finish books and be keen to go back the next week to get more.
The fear is that once a public service closes then it won’t re-open. Just received a questionnaire from my local library (15 minutes walk away) talking about reduced services. Surely this is an alternative rather than shutting them down? The idea of working class kids like I once was having to pay to travel to the library or be faced with long, long walks to get to the ones that have managed to escape the cuts is horrifyingly depressing. Local councils have to be pressured to not close libraries and to seek to be more visionary about how they operate.

Found this video of the Fela burial on YouTube. The quality is terrible as it’s a transfer from a pretty ropey vhs videotape. Not sure how long it’ll stay up so check it out. It is a multi-part video ceremony. This is part 1 of at least three.

Bought my tickets (finally) for The Painter.

I completely love Turner’s work and over the years have read lots of biogs and books on the work. Apparently Film Director Mike Leigh has been trying to make a film about Turner for years and once you read his story one can see why the man and his work still resonate down the centuries.

Looking forward to seeing Toby Jones in the role. he’s, to my mind one of those under-rated actors that the british film and theatre industry has formed its bedrock on over the centuries. Amanda Boxer, Jim Bywater, Niamh Cusack, Ian Midlane and Denise Gough make up the rest of the cast. Again names and faces you might recognise from stage and screen over the last x years.